had my s2400 since the pre orders days were first announced and ive never really ran into problems like this. I have a ton of patterns that ive saved into the machine over like 200+. It just started happening early this week but sometimes when i record a sample and try to chop it the start point like starts glitching and moving back in forth without touching any of the faders. Going back and forth as if i were adjusting the sliders/faders. Its happened a few times not on every sample i record but i just wanted to know if theres anyone out there if this has occured to on their unit. Or any tips would be appreciated.

Are you using the latest firmware?

On the old firmwares, I used to lock all faders and only use the jog wheels when editing starts and end points and when banging the pads to avoid that kind of glitches.

By the way, I haven’t noticed this kind of glitches on the latest firmware yet.

Yesir im using the latest firmware. It just started happening recently and its only on the beginning of the slice. Its a weird bug as it only comes around randomly. Sometimes it wont even let me edit the points im trying cut at in the start point. If i redownload the firmware after first removing it off my sd card, will i lose my patterns and songs ive saved?

This started happening to me yesterday, at least I think it’s the same thing. I tried uploading a vid, but the site won’t let me.

On mine it’s the last fader, and the end point. If I bring the fader all the way to the top/end, it starts going berserk and flicking back and forth like crazy between around half way through the sample and the end. It all happens within the top 2-3mm of the fader I’d say. Pretty strange and concerning.

I tried uploading a vid, but the site won’t let me.

You can upload to google drive and add a link here

This sounds like a dirty of faulty fader (potentiometer). If a potentiometer gets dirty the internal contacts can be affected and voltages can end up being way off. I am going to guess that there is a build up of dust at that end of the fader (internally) and this is leading to incorrect resistance values being sent.

If it was my unit I would open it up and try to clean the slider. I don’t recommend air blowers because they can just blow dust around inside the machine.

NOTE - I don’t have my unit yet so I have no idea how good the dust sealing is on the sliders and therefore could be barking up the wrong tree!

Ya its pretty strange i was playing with it last night and i didnt have it happen to me once. Every now and then randomly ive had it happen. Your probably right sugarfoot it most likely is dust and could be pretty easy to clean ive never opened it up before i might go ahead and do that if it keeps bothering me later on.

Will try sorting vid at some point in next few days. Wonder if it could be a calibration quirk, dust ofc also sounds likely.

Yeah, I just thought a dirty potentiometer because you reported values jumping around at one end of the slider play and I have experienced this on other equipment in the past which I remedied by cleaning the contacts. Having said that opening up equipment isn’t for the faint of heart! so proceed with caution or better still get advice from someone on the Isla team about cleaning slider contacts.

I’ll probably wait til I have the DSP board (if I can afford it lol).

Out of curiosity, what happens if you turn off fader catch up? Same behavior? 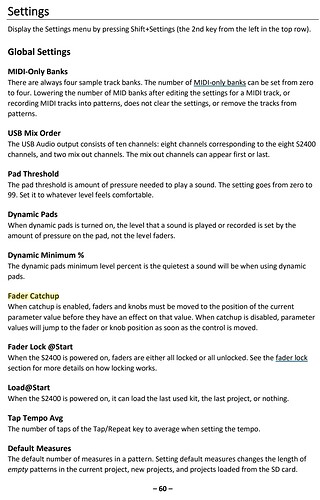 You don’t need to open it up - a spray of contact cleaner into the track of the affected fader should see you right. If it doesn’t, raise a support ticket via the website (with video demonstrating the issue) and I’ll look after you.

thanks for the helpful tip! alright sounds good ill give that a try instead. It comes and goes so the next time it happens ill probably do it and hopefully see a change

I was probably being being a bit over zealous on my cleaning tips when suggesting opening the s2400 up, but all my experience has been repairing older machines that were beyond just a squirt of contact cleaner. There is also an aspect to contact cleaners and air blowers that is ‘kicking the ball down the road’ though because if there is dirt and dust building up it doesn’t go anywhere it just gets pushed aside, Still it’s a good short to mid term solution if a dirty slider is the culprit.

On the other hand for me opening up machines and getting an idea of what’s going on in there as well as gaining confidence to do small repairs is well worth it. Once you do it a few times you realise most kit is pretty robust even at the level of the circuit board.