Save Slice Bug on new OS

Im going to try and duplicate this after a reboot but here is what happened.

I was demo-ing some of Paul Cheebas one shots through the resample engine and had been using the F4 in file list to save the resampled versions to the same folder. Cut to later and I grabbed a bassline from a different folder and made my edits and hit save. When I selected ‘Folder’ as the destination it defaulted to the folder I had last saved one of the Paul Cheeba samples to. No problem there, it appears the file browser is not navigating the tree correctly. It was skipping 1-2 levels.
To illustrate:
the Paul C folder is ~/Drum/Paul Cheeba’s Greedy Beats/
the file browser shows that is directly below the root of the SD card 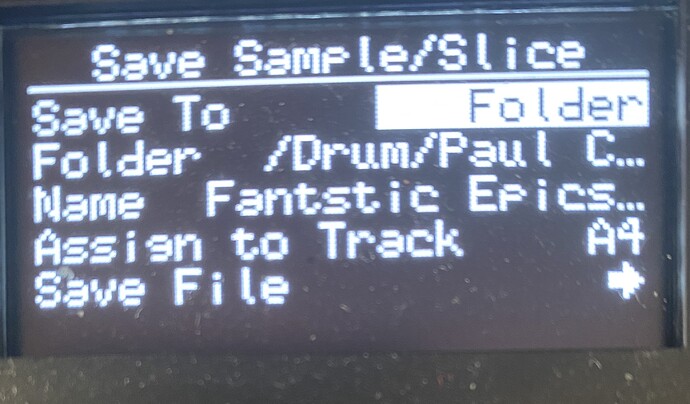 CurrentPath2933×1719 1.15 MB
Note I want to save to a folder and it shows the current path starts at Root then Drum then Paul C… 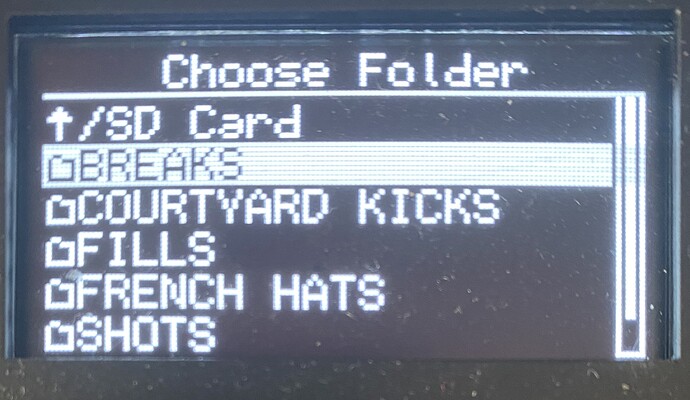 PathNavigationWrong2838×1648 1.11 MB
The folders Breaks, Courtyard Kicks, Fills, French Hats etc are in the Drum/Paul Cheeba folder, but the file navigator wants to jump to the root of the SD card with the up arrow. When I hit the up arrow I get this message: 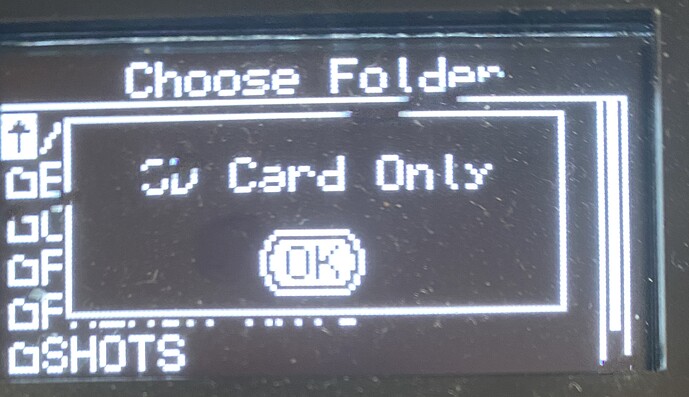 I will try to reboot and save a file to see if it reads the tree correctly or see if I need to do the resample steps first and post back.

You cannot save files in the internal flash memory. The “SD Card Only” message means that you have to select a folder on the SD card. That is why it is not letting you go up a level from there.

Hey @Mickey I 100% agree with you there. The bug is that it is not correctly reading the file tree. I cant navigate “Up” from a subfolder. Look at picture 2 in my first post, and here is what finder shows as the file path:

I see. We will look into it.

I believe this is fixed in dev. Will be in the next update.

So, is it working now?
TBH, I found a bug, but I am not certain it was your bug, as I could not reproduce your error.

Im wondering if it may still be out there. This bug seems sort of similar:

Im going to do the same steps that happened yesterday and see if its an issue. Im chopping up a bunch of stuff I recorded off of my Optigan(which will be on the file exchange before too long), and will be doing the same thing I was doing in the Paul Cheeba folder so that will be a good test.

@Mickey resampled 100 or so files last night and it did not lose its way along the path. I will try some more today but so far youve squashed this one.

@Mickey I spoke too soon. I had not used the 2400 since I started it up a few hours ago so Im certain of the recipe.(Will post exactly what I did even if there are irrelevant details)

When I did start to use it, I went into Sample mode, sampled something and then hit Level, normalized it to -0.1db then hit Save. By default it wanted to save to a project, which I did not want to do as I had no project open. I changed that to folder. Folder seems to persist the last folder youve saved something to. I happened to have saved something 4-5 folders down the tree last. When I clicked the encoder on the file path, it seems to lose a few layers in the tree. The last path I saved to was:
/SD Card/Albums-wav/some subfolder/some subfolder.
The Choose Folder dialog ignores the ‘Albums-wav’ folder and the path is represented as
/SD Card/some subfolder/some subfolder. 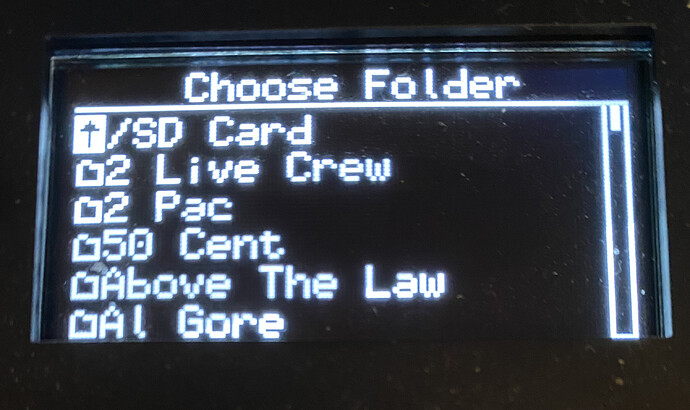 Choose Folder3024×1801 1.07 MB
Notice the ‘Albums-wav’ folder is not listed in the path. However, instead of hitting the up arrow I decided to select ‘SD Card’ as the destination. On the Save New Sample screen it shows that I selected the path:
/Albums-wav 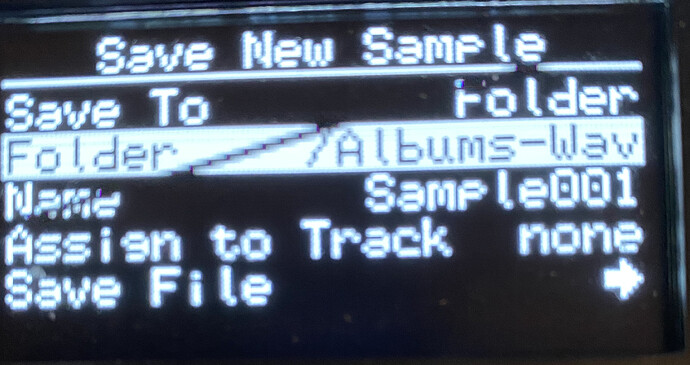 ChosenFolder2916×1543 1010 KB
So I think the result of the bug means that I cant navigate to the folder tree that I really want to store the sample in. Since the choose folder dialog isnt letting me navigate up and out of the Albums-wav tree I cant get down to a different folder under the root of the SD card called Drums which is at the same level of hierarchy as the Albums-Wav folder (both under the root of the card)

Save a sample or resample something under the Folder 2 subfolder.(whatever sets the last used file path cache) Then record a new sample with no project active choose to save it to a folder and not the project and you should see the problem Im seeing.

Yep same happened to me,have just made a folder where it is stuck on and save my samples there for now, kinda of a workaround

@StupidAmericanPig Great explanation. Thanks so much.

Definitely fixed now. Will be in next update.

Just updated to the latest firmware and just had the exact issue as OP happen while trying to pick a folder to save a sample to.

I had navigated down the folder hierarchy a few levels to select a folder, but then went up a level or two, but not all the way back to the top root level of the SD card. Despite that, the SD Card was being displayed at the top of the tree on the screen, but the sub-folders displayed under it were not the ones actually under it, but were ones about three hierarchical levels down. The sub-folders being displayed were from the correct hierarchical position where I was navigating, but the SD Card displayed at the top should not have been there. Trying to go up a level resulted in the SD Card only msg, but once I hit Shift+Back the navigation jumped back to the screen where only the internal folder and the sd card folder are displayed. From that point I could again navigate up and down the folder structure w/o issue.

HOWEVER, it happened again while I was typing this trying to reproduce it, but I cannot sort out the sequence that triggered it. Definitely still seems to be lurking in the firmware though.