Ever upgrading to midi 2.0?

Any chance midi 2.0 will ever be implemented?

I have been wondering the same thing as I build towards my future set up.

As the protocol matures other features may be present. This will future proof the sp2400 IMHO.

An older thread from Sequentix but useful as they are indeed planning for it and have already come out with Cirklon 2.0.
http://forum.sequentix.com/search.php?keywords=midi+2.0

> The effectiveness of MIDI 2.0 will really depend on the physical layer.
> Even if the protocol is backwards compatible with serial MIDI, it will likely be very hard on the bandwidth.
> To take full advantage of the MIDI 2.0 would probably need a hardware update to Cirklon 2.0
> Nothing drastic, maybe just a TFT screen on a faster CPU with USB host and ethernet support.
> I would make the new mainboard and display mechanically and electrically compatible with the existing enclosure, UI and IO boards, so there would be an upgrade path for existing owners.
> It would need a couple of extra holes in the rear panel, of course.
*> *
> I need to do some more research on MIDI over networks, but it has an obvious speed advantage over full speed USB, plus ethernet can be transfomer-coupled for electrical isolation.
> The RTP MIDI procotol for MIDI 1.0 supports timestamping, so you can get the jitter down to 0.1ms.
> I’m sure the options for MIDI 2.0 over RTP will be better still.
> 100 meg ethernet runs a shade faster than serial MIDI.
> The iConnectivity MIDI 4+ supports RTP, so a simple cross-over cable connection would give you 4 extra in/out ports with better timing than USB.[quote=“Mickey, post:3, topic:3417, full:true”]
Which MIDI 2.0 features are you interested in?
[/quote]

I am curious about property exchange if there is the ability to recall kits. I suspect no for the SP2400 given its nature but if so…boom! 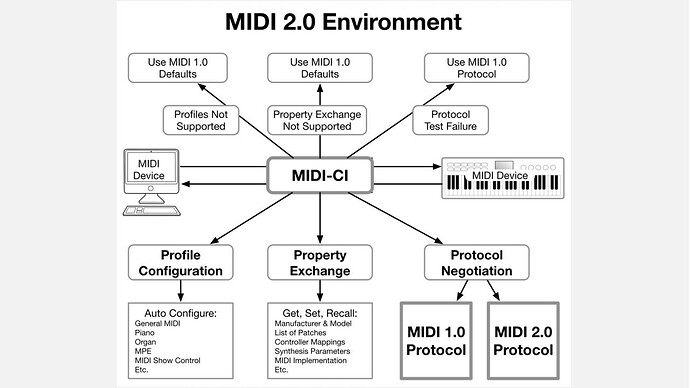 The core MIDI 2. Specifications are available for download by MIDI Association Members You must be logged in as a TMA member to download the spec. If you are not a member yet (or not logged in) , clicking on the link will take you to the signup page...

Specifically in the context of recalling sets for live use which in my case will be from the Cirklon.

Things I am not sure about…

I’d say let’s give MIDI 2.0 a decade or two to stabilize and get adopted

For me the biggest feature would be automapping.

Considering that they already spent a decade developing it, it will be adopted. This isn’t a firewire, USB 3, etc protocol. It uses existing technology. Not saying it is simple but waiting a decade is a bit much. It will be adopted as all manor players have had a hand in its development.