There’s a glitch with the Commit Action that transfers the Live Loop Recording Buffer to the active loop. (ie: When you press the ‘A’ button to commit the loop, or click to another track, which commits the previous)

Right after the commit occurs, there is a gap of no audio, and also there is a skip/glitch with nearby beats, where the beat may be delayed.

Below, I took some screen grabs from Ableton Live of recording, one with the previous bar at the same point (while the loop is still in recording buffer), and another right at the point when I committed the loop. They are lined up exactly, and the image shows the gap and delay of the following downbeat.

Hope this will be fixed soon. I bought the S2400 for its live loop capabilities. 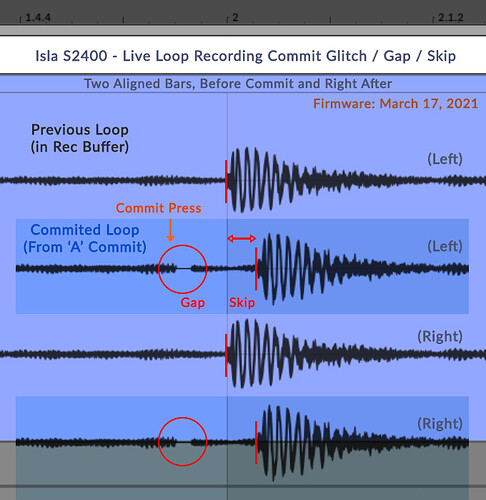 Also, mentioned in a separate thread, but the (Input Monitoring: Off) really needs to be addressed too. It’s not really truly Off, if it turns back on every time you are recording a loop. Need a way to have it only playback what’s already in the buffer, and not live repeat the input… otherwise, any professional setups where the instruments are live monitored through main mix/recording setup will have duplicated audio whenever its recording, and all the constructive interference / volume gain and slight phasing issues.

Thanks. The commit gap has already been reported, and is fixed in the next firmware update.

That is great news! Thanks for the response, Mickey.

If you can look into the (Input Monitoring: Off) issue as well, that would be awesome. Just need a way to have it truly be off, even when a Pad Loop is recoding… It should only play what’s already been recorded in previous passes in the buffer, and not retransmit the incoming signal… as to avoid doubling / constructive interference when the instruments are already live monitored through a mixer/recoding setup.

Once that is fixed as well, this machine will be an ideal Live Looper setup for dawless hardware jams… I plan on making some videos featuring this type of usage with multiple synths and other outboard devices.

Cheers… and congrats on the S2400… great machine!

It’s been a while since this post but it seems that the problem still hasn’t been solved. I’m running the February 2022 software but I’m still getting these commit gaps. Is anyone else experiencing this? Cause according to @Mickey it should be sorted by now.

And I’d like to +1 on the request to not have a live loop automatically monitor what’s being recorded. I’m also trying to use this for a live setup but this way the signal is always doubled when recording a loop.

Lastly, on the off chance that anyone can give some info on this: Will the new firmware be released within the next weeks or more on the side of months?
I’d love to use the S2400 as the centerpiece for my live setup but unfortunately I can’t do that until these things are sorted out. If it will be released something like spring 2023 I’ll have to start working with something else.

Very much agree with the monitoring when using the live looper. It would also be great if you could monitor through the track when just having it selected.

If you have any filter or volume settings set on the track, you won’t hear that when rehearsing/jamming but as the recording starts you will here it like it will be played back.

This can be very frustrating when recording loops with the ”fixed length” option.

That’s a little annoying to me. An option to ”monitor through selected looper track” would great.

I agree with both of these so so so much, they would allow me to kick my current looper to the curb and I would be forever grateful.

I know stereo live loops are coming, according to @bradholland himself (in the next FW, no less)…any word about some of these minor (well, major for me, haha) things getting worked out/smoothed?

Regarding the delay when committing the last pass to the loop - has anyone tried looping whilst no other material is being processed? ie. No sample tracks, no midi tracks…just the live looper

I ask because it sounds like there might be some sort of CPU processing delay occurring at the moment of committing and so if there is no other load on the CPU what happens then? is the issue resolved or improved?

I would test this myself but am still waiting for my s2400 to arrive. The live looping features of the s2400 were a biggish part of what sold me on project so I really hope this glitch gets sorted if it hasn’t already.

Last time I tried it I had nothing else going, so it’s probably not a CPU thing.

I actually meanwhile resorted back to the Octatrack for this central role in my live setup. While I much prefer the tactility and workflow of the S2400, the Octatrack just offers a lot more flexibility for live use. This is not to bad-mouth the S2400 in any way, it’s a brilliant machine for the things it does well. But at this point I regard the live features as awesome cherries on top of a machine that is most at home in the studio. Which is not a problem, I’d rather have it be the best it can at that role than try to cover every imaginable scenario. Nevertheless, I’m very excited to see what the new firmware brings!

I wish the octratrack had more character and an easier / better workflow, but otherwise it really is the most flexible sampler ever built imo. There are myriad ways of using it, or not, and it even doubles as a mixer of sorts. If one insisted on a live set up without a computer I would imagine this would be a no brainer. Working in a studio with a DAW gives me no incentive for one however.

The knobcon update is the most current information regarding the upcoming update. Nothing has been announced about an ETA.

I will be straight on testing this once mine arrives but I did re-listen to a few of the demos (Lisa Vasquez and Alex Ball) on YT to see if I could pick up that slight delay at the beginning of the loop and didn’t really hear it on their demos, although obviously YT demos aren’t exactly clinical.

But the live looping has been a significant feature for sometime so I imagine that they will be doing all they can to iron out any kinks in its functioning…well I hope they are anyway because it was probably the feature that tipped my buy urge over into the positive. Having said that the analogue filter card possibility was also a big plus for me and it sounds like at some point they will be coming good on that one which will really put the S2400 in its own league as a sampler groove box. I will probably forgive even a glitchy looper function once the filter card arrives!!!