wouldn’t it be great if we could use the keypad for typing? we are all familiar with phones

until we get some other option that seems so much better than scrolling to select digits for names when we save and name samples etc, projects…

I thought about this too but the problem is the keypad is used for other functions like delete and insert. Maybe a slider to enter text would be better.

hey Doug, so even in save mode the keypad is in use? i would have expected it to be accessible

This is a swell idea!

Brad had mentioned the simplicity of “old” Nokia phones during the initial design phase for the S2400. Using the function keys like an old Nokia phone keypad is a great feature for people who hate to scroll through text. How much more old school can this gear get!

Yes as it is now the buttons 1, 2, 3 are used for delete, insert, save during text entry.

hopefully there is a way to implement shift+ for such processes

What an awesome idea!

There are 9 F-keys. They could be:

Not exactly like the old phone number/letter associations, but I actually like the way that four out of five vowels are the first letter in each group.

I’m watching the live stream from September and when Brad showed using the encoder to enter/change sample names, this is the very first thing I thought. The encoder entry for names is one thing I do not miss about old samplers!

I suppose it is all about personal preference but rather than a keypad I think an extra window to help entering text is better.

Like in the screenshot below taken from JJ OS. 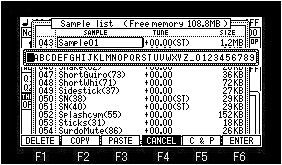 It is the same principle but it is visually efficient because we can see almost all the characters.
It works with the data wheel to select a letter and physical buttons to go to the next or previous letter.
It also depends on the data wheel speed.

For example on the MPC1000 we can spin the data wheel very fast so it doesn’t take much time to rename something.

This post was made one month ago so maybe something has been done / improved already?

Anyway I look forward to receiving my unit. It will be better to throw ideas or feature requests with the real thing in our hands

yup, personal preference is more than fair but this post and method is exactly why i posted about the keypad being used, aside from the wear on that encoder that already is to be used for a massive amount of work:

i am sure if anything else is to go by they will offer different methods so a user gets to choose, that seems to be the M.O on other stuff. i hope this finds its way to text , if not it isnt the end of the world

Maybe there’s a way to use your computer keyboard hooked up by the USB cable?

Otherwise I’ll probably just drag & drop the files to my laptop, rename them & dump them back in the S2400.

That’s what I do on my SP1200 with the SD card floppy replacement drive.

Can just do it via USB with the S2400, without having to remove the SD card.

Yeah, if the storage file system is accessible via the USB connection then I guess that would work. I’d still rather name stuff easily as I create the samples though tbh