I was playing around with midi sync settings in logic, and noticed that there was a lag. Meaning that say I was at bar 25.1.1.1 when I wanted to start recording, if I hit record there was a delay of around 17 ticks before audio was recorded so bar 25.1.1.17 in logic. To remedy this I set the Logic sync pref to a negative delay on the midi output. As I was testing this, I noticed the S2400 stopped responding and froze. Im going to try and reproduce it now to see if there is a better recipe.

dunno must have been a fluke. Cant reproduce…

One of our beta testers noticed an issue with Logic. They said:
It’s something to do with how Logic is retriggering in “Song” mode that causes the Les Dawson timing.
In the MIDI sync settings make sure you set the clock mode to “Pattern” instead of “Song” and that will fix the problem.

Logic has never been good with external sync. I use Expert Sleepers UASMO for midi clock with Logic. 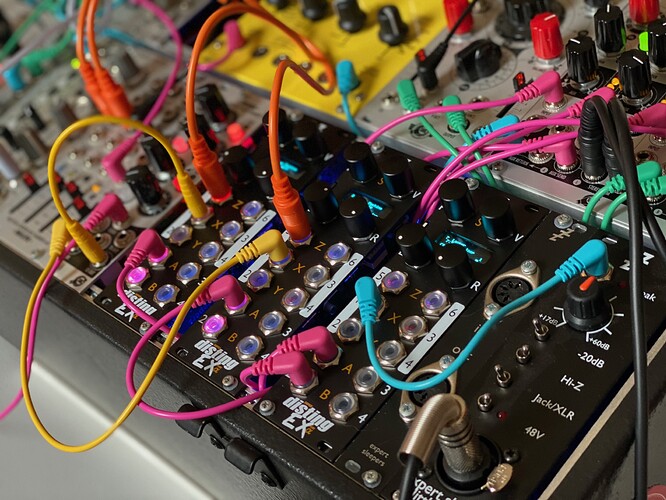 @LonzoB thanks for the tip. I am glad that it’s not just me. It’s interesting(maybe sad?) to see how much variation really exists by watching the s2400 tempo meter vary +/- .3 bpm. What is that doing to my music?!?!

I have been sort of switching DAWs to Cubase or Studio One and or ableton. I like studio one 5 the best with live a close second. Timing may clench a winner.

You might find the issue with any DAW. I went through pulling my hair out with the sync issue until finally buying an Innerclock SyncGen - it was sample accurate sync generated from audio pulses. The Expert Sleepers is the same idea only simpler.

Midi Din jack - clock out and Notes out enabled

and…nothing…Les Dawson not even entered the building

@jonesy101 I spent 15 minutes trying it myself. Im using USB B midi and while I see Logic flickering the notes out for the pad, I dont see any start stop activity no matter what settings I choose on the S2400. I will see if I can get my SP-16 to control Logic. If that works I will capture the difference via SysExLibrarian.

thanks for letting me know

I mean this must be possible?

Really want to make a tune on the s2400 (using up the 8 poly), transfer that to Logic and then to jam over the top of Logic with a fresh v2 s2400 project with S2400 as Master and Logic slave

The only way I’ve ever been able to get Logic to sync to midi (LP9 was my last use of this several years ago) I had to use the SBX-80 and treat it like a tape deck.

The problem is that Logic doesn’t accept midi clock as an input control. No incoming MTC allowed. But it does allow us to send and receive MMC.

No idea if this is gonna work, but it would really nice to be able to drive Logic remotely without the bummer of the SBX-80 (which itself doesn’t receive incoming MTC either)

It seems its ‘possible’…

The Lock (and Unlock) SMPTE Position function is available only when Show Advanced Tools is selected in the Advanced preferences pane.

In all synchronization situations, regardless of the simplicity or complexity of your studio configuration, the following rules apply:

Important: In most cases, you will need to manually set each synchronization-capable device—including Logic Pro X itself—to act as master or slave. If you don’t do this, there will be multiple master devices in your system, which will result in synchronization errors.

I tried all of those settings in pretty much every possible combination with my s2400 and sp-16 with no luck. I do have a sbx8(the aira one) and may try that today

Edit- also tried this in Studio One. While I could set the sync master to s2400 I’m guessing MTC/SMPTE is required? I hate when things that should be easy make me feel dumb.

The Logic manual says it’s possible to be synced externally - but hasn’t worked in a long time. Don’t waste your time. Have logic be master. Can S2400 send MMC midi control message? Perhaps you can just send a start/stop midi message to Logic.

I can’t confirm in logic but when I tried in studio one (equally unsuccessfuly I may add) I could see the messages in the midi debugger it’s sending them.(now whether they are the messages that are correct I don’t know)

You may think it should work, but the fact is logic is crap for controlling external gear. The only software that can tightly control external hardware I’ve found is Five12’s Numerology. In my setup, I have a hardware midi sequencer, Expert Sleepers USAMO as master clock, and Logic Pro as a tape recorder. This setup has been rock solid. Let me know if you find something else that works.

I think you have to create a Generic Midi Controller in Logic to start Logic from an MMC start message.